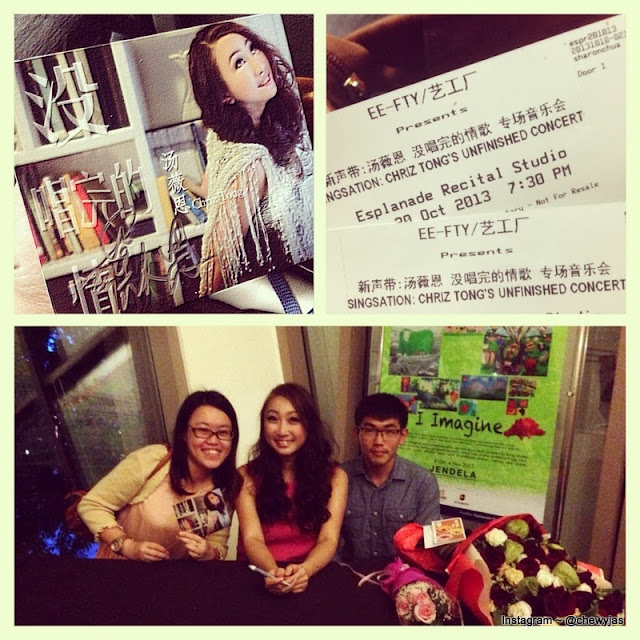 Chriz Tong's Unfinished concert was awesome! Glad that I spent this rainy Sunday evening immersing myself in her beautiful voice. Didn't miss the opportunity to get her to sign on my newly purchased album and at the same time, a photo with her and my bro! Fan-girl mode~ Heehee. 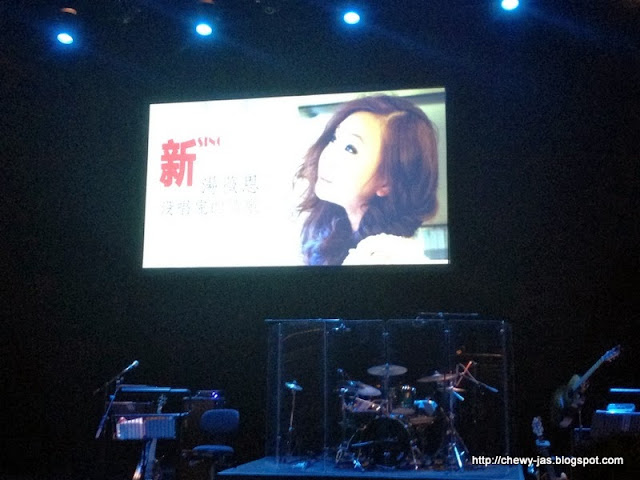 Chriz Tong's Unfinished concert is actually her first ever concert held at the Esplanade Recital Studio which is an ideal venue cause I felt it brings her closer to the audience. The sound system and all is superb too!

The "Unfinished Concert" theme was inspired by her latest TV drama series, Love at Risk's sub-theme song that was titled "An unfinished love song". "Unfinished" in this case also refers to Chriz's constant dedication and passion in her singing career to sing more songs for her fans and audiences.

Chriz Tong serenade us with the song 橄榄树 (Olive Tree/Gan Lan Shu) as her first opening song. This is not an easy song, Sun Yan Zi sang it and was recorded in her 4th album and also recorded in Chriz Tong's latest album. At the beginning part, Chriz sang it without any music in the background. Just acoustic and it really blows my mind away.

After that, she sang 味道 (smell) which was her first tailored song, did a cover of 找自己
by David Tao and an English song "Girl on Fire" by Alicia Keys. Watch my 15 seconds instagram video of her singing Girl on Fire here. 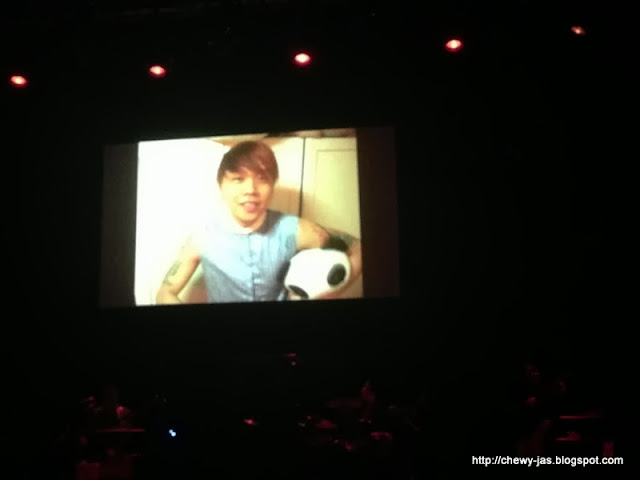 A short interval whereby videos of famous people in the music industry sent their encouragements and wishes to Chriz. Many of them congratulate her and also hope that she will move on to perform for a bigger audience next time at the Singapore Indoor Stadium, Taiwan Arena, etc. 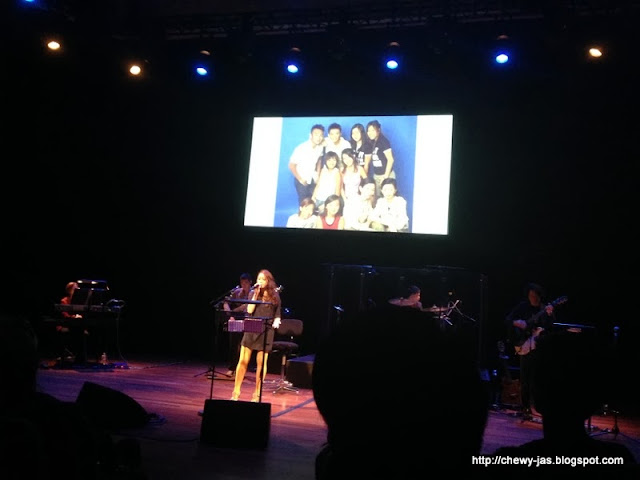 Chriz Tong is out again with a change of outfit and she sang us three songs, mostly her own creations. Dan Shu Lu Cheng, Wan Mei (完美) and Wo Hui.  Wan Mei (完美) is a song that she wrote when she was very young so in the music one can feel the youthfulness and energy. The screen behind shows many many photos of her during her younger days with her friends and even photos of her with short hair. It makes me feels like going through her life journey with her.

The humble Chriz with the "P plate" decal pasted on her guitar as she told us how she just started learning guitar 3 weeks ago. She sang a song called Kao Yan (考验). Well done! 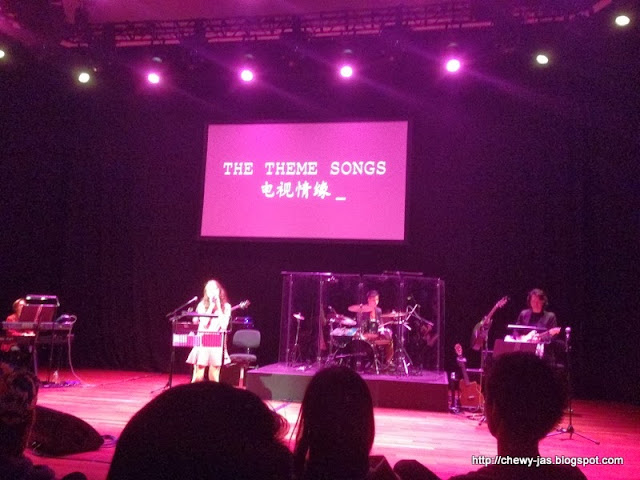 In the next interval, Chriz came back to the stage, dressed in a pretty pink dress. She sang the following drama theme songs.


Like every other concerts, there bound to be a special guest in between. For her, she had invited Peter Tan 陈彼得老师 to be her special guest. They sang a duet song called 《愛你》which is the ending song for TV Drama 砂锅肉骨茶。 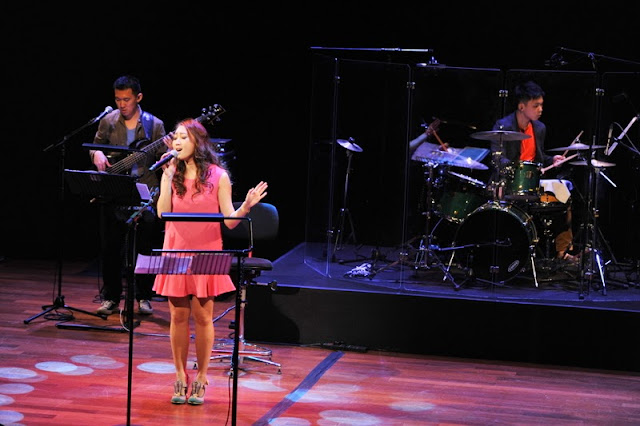 After the duet, Chriz sang 《一首没唱完的情歌》, ending song for 爱情风险。She went to the backstage after this song and we shouted for encore!

So she's back again with the last song, "Part of Your World" from Disney's Little Mermaid. She sang this song with a lot of emotions. Below is a video I "secretly" took. Hehe. 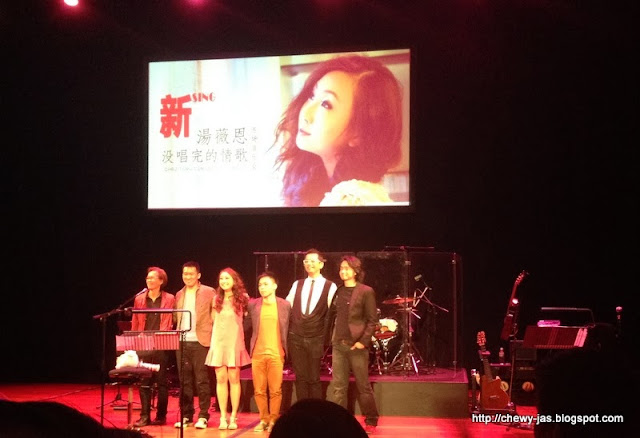 A group photo of her with the band. This time it's really the end. Congrats to Chriz Tong for putting up a really great concert. Hope to see her grow and be successful in her music journey. Thanks Terence for the invitation. 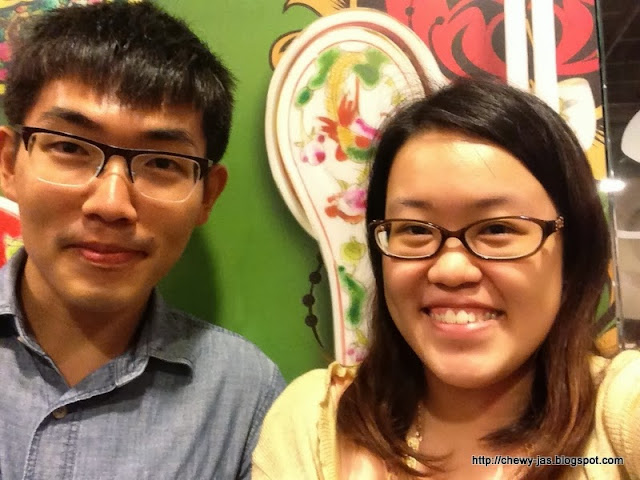 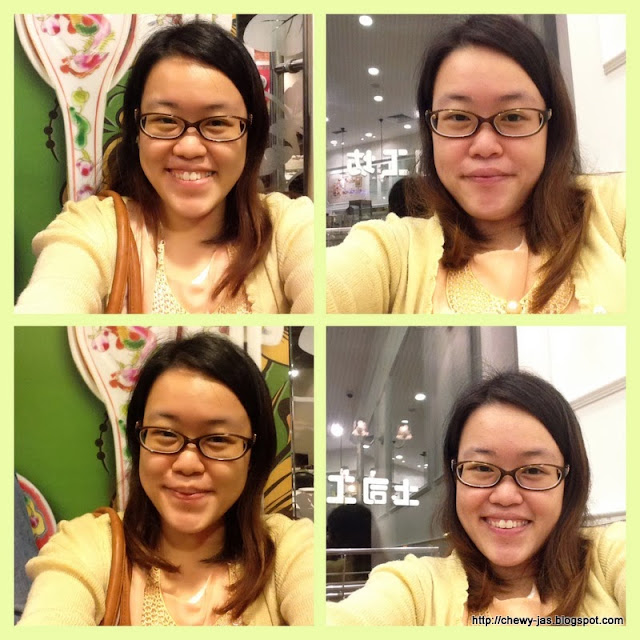 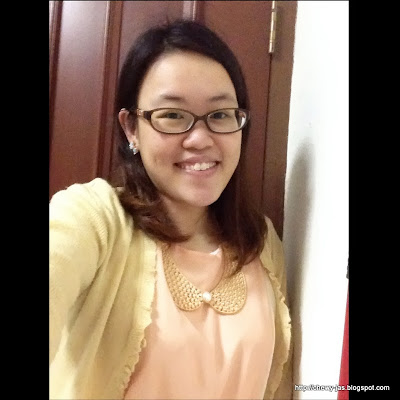 Ending my post with lots of photos of me. My hair is really dry and frizzy. Thinking of snapping them away soon but I have other reasons to keep them long. Haha. Ok, we'll see how. Till my next post! Thanks for reading! Cheers ^^
Posted by ChewyJas at 11:30 PM

Thankew jas for attending and for ur post! -chriz